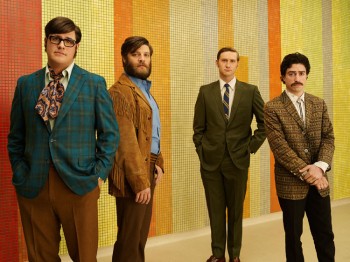 There it was again: the opening article of our Dutch ad blogs was guided by a picture that looked like it was promoting mediocre menswear. A line-up of the short headed and the beards. Wearing black and blue. Havas and Boondoggle merged. And like most other get-togethers, long hair or pink was absent. From juries tot co-created courses: there are hardly any successful women in Dutch advertising and there is probably a reasonable reason for that.

Advertising is software. There is no proper education for it, no objective method. It is not like any other major in which you do the drill, learn the skill. An accountant, an architect or a surgeon should do their job properly or mess up and will be convicted for it. In advertising, we are never to blame. (Okay, we might mislead, but we aren’t send to jail over it). In our league there is no right or wrong. It revolves around perceiving people and contemporary culture, eye for detail and originality. It may even be irrational, that will only make it more outstanding.

One might expect that women would do absolutely terrific in this field. They can totally be themselves in observing others, talking about unsolvable problems endlessly and lose themselves in irrelevant details.  They don’t. Or most of them don’t. Why? Because they stop where they should be beginning.

We hear it all the time. Women have two single arguments for doing of skipping things.

That’s it. You might be waiting for an explanation or elaboration on the argument. There is none.

Women rely on their gut feeling. And that is great. It is based on all these years you have been making your way in the world. Some women even are gifted and developed their feeling forces in a way they can forecast the future, read other people’s minds and can long-distance curse healthy baby birds to fall stiff from their nests. I know these witches. They exist. They aren’t with many, though. If you are an average Dutch woman, you wil probably just feel experience-based. Nothing chakra. But still a complex system of subtile subdivided emotions. More than right and not right. Even Facebook preprogrammed more feelings than that…

Maybe women should take their feelings even more serious than they do. They should respect them. Analyse them to the bone. Fear them even. Find out what is causing their guts to speak up. One feeling can easily be mistaken for the other. Fear for nervousness. Anxiety for lust. They all make you throw up sooner or later. But that doesn’t necessarily make ik wrong. It could easily be so right it causes fright. Scientists have been aiming to come up with a complete list of feelings. Some define around 278 of them. Right is not one of them.

Women should not be taken seriously as long they don’t take themselves seriously. We are to blame. Shame on us. Even men use the easiest of answers more an more. Probably since it is the ultimate way to keep conversation short. And everyone gets away with it. There is no problem there, you might argue. Maybe there isn’t. But… it somehow I don’t know just doesn’t feel right.

This column was published on http://www.amsterdamadblog.com/columns/why-women-should-not-be-taken-seriously/