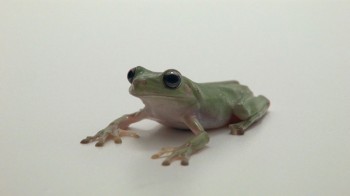 Last year I discovered invisible stains in my laundry. Vanish introduced a fresh product: Vanish Oxi Action – Multi. The “Multi” takes care of different kinds of stains, so Vanish claims: “the visible ones and the invisible ones!” So there it was. My brand new problem. Invisible stains. Right in line with the dirt under the rim of my toilet. And the limescale build-up in my washing machine. And my cocaine being in fact white heroin. Or Vanish. There is just no way of knowing. Or of knowing when the problem is solved.

This frightening form of advertising has so far been solely practiced by the drug(store) industry, with its foams and creams and gels and powders. Covering their asses with the sunny smell of rosebuds. It was them that gave us our bad name. It is their fault Bill Hicks rightfullycalled upon us ’in advertising and marketing’ to kill ourselves.

Just recently, a surprising new brand has entered the domain of fearvertising. It is not a soap. It is… Triodos Bank. The teacher’s pet of the class of financials. The love brand of left-wing families. The prince of principles. Triodos told me there are things ’they’ (others) have been keeping from me. Things I really need to know. Then, they did not sell me one problem, they sold me five.

1. First of all, Triodos revealed that the often-used metaphor of the frying frog is unjust. They have tested it – well, Triodos didn’t really since they love and respect every living creature, so they explain in an additional production (in Dutch), but ’they’ (others) have tried to fry frogs – and apparently it did not work. In other words: I have been using a false metaphor all of my grown-up life. And Triodos has friends that fry frogs just for the sake of science.

2. Triodos shakes up my identity by telling me I am not a machine. I am not? Triodos states how ’they’ (others) have created a rewarding system revolving around egocentric individuals, only in it for private interest. Whereas – they claim – I am a social being and want to share all I own and earn. Since I don’t want that, I now feel a sociopath. A machine. And I am afraid Triodos is sharing my savings with people that work for Greenpeace.

3. Triodos points out that a butterfly can start a hurricane. In search for the scientific proof of that, I found a subtext explaining this is only a metaphor. So now they hand me over a cool new metaphor I should immediately forget or avoid using since it may fall through like the frogs once Triodos’ animal-nagging friends get a hold of a butterfly.

4. We are better off without bosses. Great thinkers and leaders, who needs them? Triodos is proud to present: bottom-up banking. They are waiting for us, Simpletons, to come up with new ideas. I had no idea that it was up to me! I was buying mascara. That is why this crisis lasts so long…

5. You should not trust bankers. Well, that has been common knowledge for the past decade. But to admit – as a bank – that your employees make mistake after mistake and can’t be trusted with your money is another. Couldn’t Triodos have hired (or trained) the better ones? Is my money in immediate danger there? They say they want me to keep thinking along with them, since ‘the new way of banking has started long ago’. Well, if the past years of Triodos’ New Banking has led to their current 0,4% interest on my savings, I will now put my head in the oven.

So it is official. Triodos has lost its mind. And that was rather an expensive (and nice) campaign to just throw away like that. The prince was kissed into a frog. But I have no time to worry about it. Adieu, Triodos. I got five less problems without you.